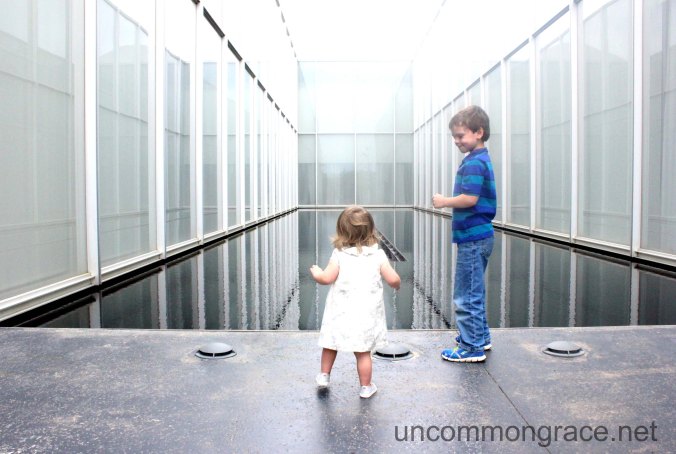 Last night I told Brian that I had seen a list of things parents never thought they would have to say… until they had a boy. The list was funny, but most were pretty mild. I mean, “Why is there pee on the floor?” is amongst our weekly refrains which usually ends in all three boys pointing immediately at another brother…

I was pretty sure that I could top most of the other parents’ responses since my life is pretty hilarious (at least to me, anyway). Our list of notable phrases includes “No, Darth Vader did NOT make you do it!” and “Why in the world would you and your cousin decide to try to poop on your baby brother?” An honorable mention was “Don’t worry, your guinea pig is not an animagus!”

Other safety-oriented things we’ve had to make clear included “You cannot dive out the school window to get to the playground!”(that was during a parent-teacher conference) and “Hand sanitizer never goes in your eyes!!!”

I’ve even had to say to a theologically-challenged son, “You cannot pray to Goliath!”.

Until today. One day is all it took for me to regret the fact that my kids seem to do hilariously unexpected things. You see, today, I won the contest.

If I didn’t before, I think I hate Olaf now.

And yes. I said, “Monet”. As in Claude. Pretty sure he’s rolling over in his grave right about now.

I’ve been feeling really cooped up lately, but I’m not up to much yet since I’m still healing from the accident so we decided to go to a museum where we could walk around. I love art and after months of pain and doing very little, the idea seemed perfect.

“Perfect” should have raised a red flag in my mind since “perfect” and “three boys” seldom go together.

Things were going really well (if you don’t count saying “don’t touch” a gazillion times while looking at sculptures) until I paused for a minute to read the tag about the Monet painting on display. Apparently, one minute was too long for the three-year-old whose hand I had been holding in a vice grip. He used his other hand to pull off his Olaf beanie and chucked it directly at the painting.

I realized, with absolute and utter horror, what was happening when I saw that carrot nose whizzing by.

It smacked the painting right on a water lily.

Thank God there was protective glass over that painting – otherwise, the news headline would have been “Olaf Destroys a Monet!” I still can’t believe everyone failed to notice Jack’s attempt to give the world yet another reason beyond “Let it Go” to hate the Frozen characters.

I dragged him away immediately (probably what he wanted, though) and confiscated his hat (something he didn’t want at all). Such was the end of our museum trip.

In regards to the craziest things boys will make you say, I think I’ve won… but in what should have been a moment of parenting one-upping triumph, I’ve definitely decided I don’t want to win anymore. Go figure.

To be perfectly honest, I’ve been struggling these past few months with how sick I have been. I’m still bruised from the accident that wasn’t even our fault… and it doesn’t matter that it wasn’t our fault because fault doesn’t change the situation in which we find ourselves in life. While I am completely for taking responsibility, at a point, whose responsibility it is doesn’t matter.

We have to learn to gracefully accept and respond to whatever we are given because it is given to us for a reason — this is our responsibility in any and every circumstance.

I think God cares far more about our hearts in any situation than how we outwardly respond. It isn’t fitting that we should be looking around and comparing ourselves to how everyone else is doing or what they have, for better or worse, instead of fixing our eyes on Him and Him alone.

Fair is a tough thing in our culture.

I get far too upset when isn’t fair, but in reality, things are more than fair for me. Fair is getting what I deserve and Jesus already took that punishment for me with His death on a cross.

If anybody has the right to complain about life not being fair, it is Christ. And yet, He never did. He offered us grace.

I’ve already won. I’ve been given what I could never hope to earn. This grace pulls us into a relationship with Him and changes us, otherwise, it is a cheap imitation of this real and life-giving grace. Our identity, firmly rooted in His, is how we can have the confidence to walk difficult paths because life isn’t always easy.

I know who I am: a sinner. Trying to become a better version of myself under my own power isn’t really faith. It is an exercise in humanism where the point is to make ourselves happy and we only end up chasing our own tails like we have been doing for centuries. We’ll never outrun or educate ourselves out of this darkness in our hearts. It won’t happen – it can’t happen. We’re sinners. I’m a sinner. My three-year-old is a sinner.

Which is why I was thrilled that Jack just decided to accept Christ as his Lord and Savior (on Friday the 13th, as befits his personality) and ironically, right before the Olaf versus Monet debacle.

Apparently “Trouble” thought waiting a minute for me to look at painting was unfair. Olaf probably thought being flung through the air at artwork was unfair. And Claude, well… I’m just glad he didn’t live to see this day as assuredly he would have thought a cartoon character accosting his masterpiece was unfair (again, so thankful for the glass and Olaf is only yarn!).

Obviously, forgiveness doesn’t change our nature or our struggle with fairness, but it does begin the process of being made into a new creation.

It’s amazing what a flying Olaf can teach us about grace.

I’m just not so sure Jack deserves that hat back yet, though… if ever.

And… If you happen to be a security guard at a museum, and you found some really interesting security camera footage… please know that I am profoundly sorry and Olaf is never, ever, coming along again (or any other loose items for that matter) and my three-year-old will likely be in a straight jacket if I ever allow him to return which probably won’t be before he is twenty. And if it is any further consolation, I’m going to have Frozen-themed nightmares, Impressionist-style, tonight.

And since I don’t care about winning anymore, what phrases did you think you would never have to say to your kids?