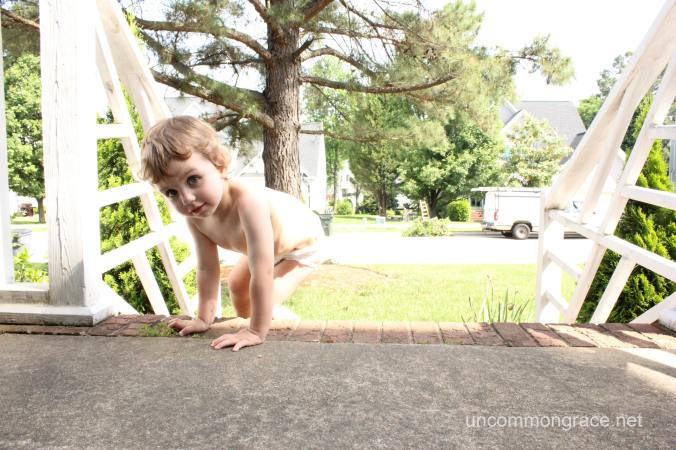 Life is sure to never be dull with three boys! Ours are now eight, six, and two and a half respectively and keeping me on my toes. My dad was one of three boys and I feel like I am beginning to better understand his childhood better. When he told me stories about the things he did growing up, I thought they were all crazy. Now, I’m seeing history repeat itself…

This week our two and a half year old has hit a whole new level of… something. Not quite sure what to call it yet.

Our foster daughter was heading out for visitation one morning this week and I explained to Jackson that she was going to see her parents.

“Ummm… you are looking at one of your parents.”

It culminated later when he decided to look on Facebook to pick out his new set of parents. We decided that these are two year old problems in a foster family. You can just get a new set of parents if you want and, apparently, as many parents as you want.

Later this week though he decided to claim me again when our six year old Luke said that I am his mommy.

Jackson screamed at him, “NOT your mommy, Goo (his personal pronunciation of Luke). She my mommy. You have different mommy!”

Jackson is also becoming much more independent. Twice this week he has decided to try to walk out of stores… without me. We usually put him in a shopping cart for this reason, but sometimes that isn’t feasible. I swore I would never use a child leash, but we’ve decided it is necessary since Jackson seems to have no problem wandering (and running) away. We call the leash “bear backpack” to make it more fun since he wants to wear a backpack like his big brothers. This worked well until Luke decided to drag Jackson around on the floor with it. Now we don’t like bear backpack at all and it has strangely gone missing…

We also discovered why our electric bill has gotten so much higher recently. I put all the kids down for bed and collapsed into bed myself when I heard Star Wars music. I knew Brian was downstairs, but Star Wars music? At eleven at night?

It sounded a bit muffled and so I went to our bonus room where the TV is. The door was closed and when I opened it, I found my toddler watching Star Wars cartoons on the Xbox.

“I can see that, but do you know where you are supposed to be?”

We repeated bedtime and I made sure his door was closed. We recently put the door knob baby proof covers on so I thought he wouldn’t be able to wander the house. Anyway, he was cuddled up in his bed almost asleep. I went to bed again.

Brian came up to bed after playing computer games until one (hey, if you can’t do it during spring break, when can you?!) and as he shut down, he heard something. As he came up the stairs, he found Jack with the deer in headlights look halfway between the bonus room and his bedroom. He knew the jig was up.

The TV was on again in the bonus room, this time with Narnia playing. The volume was turned all the way down and the subtitles were on. Mind you, Jack is two and a half. This was “sneaky” at its finest and it will be really ironic if this is how he learns to read.

Brian later received a couple emails from Microsoft confirming some Xbox live purchases made at 12:48 and 12:51 am respectively for some add-ons for Minecraft and Skylanders. Jack has been shopping. No word yet on if the other boys, who were confirmed sleeping at the time, put Jack up to that since these were suspiciously the add-ons that they had wanted.

We are password protecting the Xbox and rethinking our baby-proofing methods.

It has been a week of expect the unexpected. Jackson’s life mantra seems to be “I’ve got this” and he has absolutely no fear which means he thinks he can do anything. ANYTHING. I haven’t even mentioned yet how he almost escaped my in-laws house when they were babysitting, put a piece of poop in the diaper bag (an apparent protest to potty training), downed half the club sized bag of string cheese when no one was looking, gleefully popped the balloons Brian got me for my birthday, climbed to the top of a store’s shoe display rack, and that we had to shut the water off to the sink in his bathroom all this week. I was getting really tired of finding the play kitchen dishes full of water hidden places. All this week. I’m tired. And afraid to go to sleep.

God’s been teaching me to pray without ceasing (1 Thessalonians 5:17), I think. Despite watching this little one constantly, he has still figures out how to do all of this. I know God is fully in control of this situation and I’m praying for wisdom how to teach this little boy who answers to the nickname “Trouble”.

It reminds me how important boundaries are; it is easy to see for kids because it seems like they are creatively trying to kill themselves constantly. Harder to see, but just as important for adults, boundaries are really God’s gift. The freedom that Jack so desperately wants is really only free within those parameters that we set for him. When he goes outside of them, as we have experienced clearly this week, that is where he will be trapped by negative consequences.

We do that too, even as adults. Somehow we equate freedom meaning we can do whatever we want, even outside of what scripture says and we seem surprised when there is a cost. Sin traps us and it is the opposite of freedom. That’s ironic.

Not so easy to teach to a two year old, but I’m working on it. We’ll see how it goes. In the meantime, I’m going to keep laughing at my unbelievable son. If you’ve ever seen the movie The Incredibles, you’ll understand why we call him Baby JackJack. It is an adventure over here!

3 thoughts on “Expecting the Unexpected”