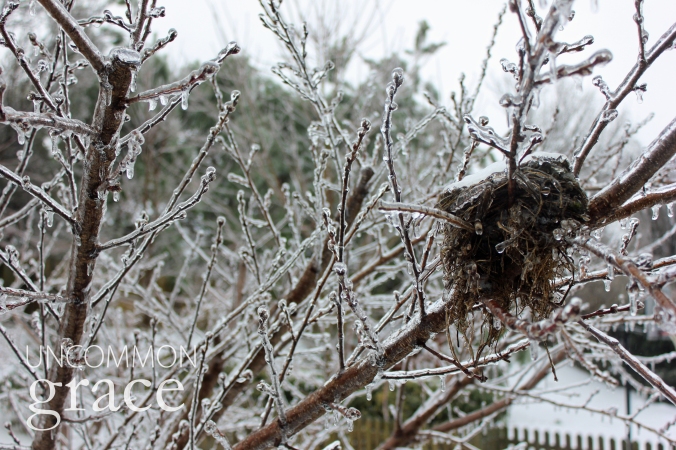 It’s March. Unfortunately, the weather hasn’t realized that it is already spring and yet, snowflakes danced around my kids as they headed to school this morning. Yes. Snow.

While I normally love the whole winter-wonderland thing, it doesn’t love me back. Fibromyalgia has given me the weather-sensing superpower that just means life hurts more when the temperature drops. Like right now. In March.

All (joking) bitterness aside, it is ironic how something as mundane as the weather can feel so overwhelming. Invisible consequences of an everyday kind of event (generally speaking, at least, since snow is common other places) don’t really register on other people’s (weather) radar. In between errands, work, and homeschool, the idea of not noticing things because they are so “normal” hit me.

If you’ve been reading along here on Uncommon Grace for a bit, you know that our normal is a bit different. As a former foster, and now, adoptive family, we tend to have some hilarious and exhausting days and that isn’t counting anything that our bio kids have done. Add that in and you get something usually hysterical and oddly unexpected. Our normal just has me surviving on grace and coffee.

I know many other families have a normal that is similar with lots of hidden stressors like my chronic illness or foster and adoption pressures. Those aren’t exclusive, though, and many people deal with far more and I think most people deal with at least something.

It is why we need to be the village.

I think it is why the idea of being self-made bugs me just a bit — we aren’t supposed to go it alone. And while I think it is awesome that some people are able to accomplish big things on their own, we aren’t failures if we need other people. In fact, just the opposite…

And let us consider how to stir up one another to love and good works, not neglecting to meet together, as is the habit of some, but encouraging one another, and all the more as you see the Day drawing near. Hebrews 10:24-25 ESV

Being the village isn’t just going to church because while it is meeting together, it can be hard to really connect and have the deeper conversations that we need to have in order to be truly encouraged.

I serve in my church’s nursery and while I love it, Sundays are often filled with running around trying to take care of my classroom, connect with parents, make it to the service, and somehow not to forget to pick up my own kids at the end of it. And my kids are older now since Emme is officially four and a half. Even with less on their plates, younger families can feel just as tired.

If I’ve learned nothing else from living with chronic illness and being a foster and now adoptive parent, it is that being genuinely impactful takes some intentional effort. We’ve probably all thought we need a village in our chaotic moments but this can’t happen unless we are willing to be there ourselves and notice what others are going through first.

Here are some ways to “be the village” for those around you and to feel fed yourself in the process:

1. Plug In But Don’t Spread Yourself Too Thin.

This is why I love small groups because in a church of several thousand people it is easy to get lost. There are some amazing advantages of going to a big church, though, since there are so many more options and resources to help people where they are. Find a place to plug in and really get to know those in your circle. Our neighbors and coworkers are people we should notice and try to invest in too.

However, there is such a thing as compassion fatigue. Especially in large churches and big communities, there are so many needs constantly being thrown at us. Do what you can do, but don’t feel guilty when you can’t. Sometimes, we just can’t — and knowing our limits is actually Godly.

When I was first diagnosed with fibromyalgia I was 18. I had been in overachiever mode for years so I had to dial things back significantly to heal and get to the point where the pain was manageable. It dawned on me that I’m no good to anyone in that state anyway.

There is a lot to be said for doing what we can do and doing it well.

2. Being the Village isn’t Just About Meeting Physical Needs.

I have a couple dear friends who just get it. One gave me a hug when I mentioned something about sensory heavy work and said, “You’re speaking my language!” Special needs can be just as invisible as my fibro and it can be even more isolating as a parent because… well, our kids are just different.

Jack is an incredible kid who, at six years old, is reading Harry Potter and loves physics. Yet, trying to keep him alive is all I can do some days since he is just wired so differently and I have pulled him off the top of our fridge because this kid can climb like no other. He plays differently since he needs so much sensory stimulation and to other nonsensory parents, I completely understand that it looks absolutely wild. But it isn’t — it’s just Jack.

This is why I think it is really important to make sure we engage with people who are in our same situations. More than tangible support is mental and emotional support. Just hearing that what we are going through is hard and “normal” from other people in the same situation goes a long way.

Be the village just by being there, connecting, and encouraging.

3. Be Concrete When You Offer Help.

When I am having one of those days with the kids or my fibro is flaring up, I can get to the point where I don’t know what I need anymore, just that I need something. Among parents, it’s pretty common to feel like we can’t string a coherent sentence, much less fully articulate needs. Add into that decision fatigue or simply overwhelming stress make it hard to reach out.

When there are abstract offers to help like “Call me if you need anything” it is hard for people in the thick of it to even know what to ask for. And, to be perfectly honest, I think this phrase is one we say when we think we are expected to say something and sometimes we hope people won’t ask.

Be concrete with offers of help. Try “Which night this week can I bring you dinner?” or “Why don’t I pick you up on Friday after the kids are in bed and we will go for coffee?” These are a lot easier for someone who is overwhelmed to say yes to.

I get it, we don’t want to be takers so we have a hard time asking for things, but we also have a hard time seeing needs if we are rushing through everything living on the brink ourselves. I think the main reason we don’t intentionally invest in other people is that we’re tired ourselves. It is difficult to start a new habit of encouraging others and being salt and light to those around us if we aren’t feeding ourselves. But… it is hard to feed ourselves if we are out of the habit of connecting with others. It’s a catch-22.

Do it anyway. It will feel awkward at first but if we intentionally slow down and make growing with others in Christ and serving others a priority, it will get easier.

It does come at a cost of some of our “me” time, but it is worth it. The transformative relationships we build are the ones that remind us who we are in Christ and those are worth far more than the things we give up to get them.

Seriously. Most of us have smartphones or Google calendar that can set alerts to remind us to do things. Scheduling reminders to text friends, send a card, or call someone might seem cheesy or inauthentic, but really, when you are in the thick of it yourself, it’s easy to crash in bed and then realize that you never did half of what you intended to.

It doesn’t matter if we’ve noticed something if we then fail to act on it.

Forgiving people when they don’t notice the weight we carry is so important, not for them, but for our souls. It’s a spiritual discipline that we need to practice often.

I speak from experience here. My painful fibro and autoimmune issues make life incredibly hard and it is the kind of pain that just won’t go away this side of heaven. It’s why some days simply walking is nearly impossible. It’s why I dress up on bad days and people don’t see how I cry myself to sleep. The downside is that it is hard for people to know that I am hurting especially when I don’t talk about it because dwelling on my pain isn’t emotionally healthy either.

I’m truly glad that people don’t innately understand 24/7 pain — this isn’t something I would wish on anyone, but it means it is not surprising when something like this fails to show up on their radar and they don’t notice.

Since we tend to view things through our own experiences, it is easy to feel judgment for things we don’t understand. And we’re all human which means that there will be misunderstandings, miscommunications, and blindness anyway.

Letting these things fester and build hurt only cuts us off further from being a part of the village we need. Forgiving is the only answer and Christ has already forgiven us so we have no excuse to hold things against others, particularly since He has already forgiven them too.

might be more snow this weekend. The random benefit of all the cold weather is that I have been inside doing more work and I’ve created an Easter printable for you! I’m migrating to a new email service so even if you already have, sign up here to get posts and free printables and goodies emailed to you! This printable will only be available until Easter so get it while you can!

For further study, these books are ones that I have thought were incredibly helpful and impactful as I was learning how to balance and prioritize being “part of the village.” And if you don’t have it already, you can get a free 30-day trial Amazon Prime membership which gives you free two-day shipping. These are affiliate links which just means that purchases made through these earn me a commission to help keep Uncommon Grace operating. Thanks for your support!
Try Amazon Prime 30-Day Free Trial

The Problem of Pain by C.S. Lewis explores the nature of pain and I think it is important to think through these issues because it makes relating to others and empathy more effective. Buy it here.

Boundaries by Cloud and Townsend is an essential book that I think everyone who has a heart to serve others should read because we can’t be truly impactful without taking care of ourselves first especially since there is a big difference between helping and enabling. Buy it here.

The Best Yes by Lysa Terkeurst was really helpful for me when I went through it with my Bible study group because it deals with prioritizing and being intentional about our choices. Buy it here.